Leave us a note!!

ATTENTION MEMBERS:
The October 10 UPSA meeting HAS BEEN CANCELLED. We will announce a meeting as soon as we can find a meeting place and date to accommodate our group in a safe manner.

The UPSA is currently looking for a new Secretary due to the passing of our current secretary, Rick Commentator.

A recent article appeared in the Michigan Woods and Waters on Northern Pike Minimum size Limits. It details the efforts of UPSA,the WUPCAC and others in regards with efforts and reasoning to get the northern pike regulations changed.

Pleae take the time to read the following UP Whitetails position paper on this issue:

We would like to congratulate Stu Boren of Spread Eagle, Wisconsin for being honored as the The Upper Peninsula Sportsmen's Alliance 2019 "Outstanding Conservationist."

This award was presented May 4th at a quarterly UPSA meeting at the William Anderson Sportsman's Club in Hermansville in Menominee County.

Read the full article on Stu's honor from the Michigan DNR bulletin.

We would like to congratulate our president, Tony Demboski, for being honored by the Michigan Natural Resources Commission for his lifetime commitment to conservation. Tony was honored Thursday, December 13 at the commission's regular monthly meeting in Lansing. 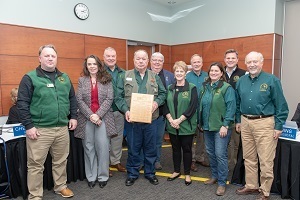 For the full article on Tony's great honor, visit
https://content.govdelivery.com/accounts/MIDNR/bulletins/2227f28

UPSA Conservationist of the Year

Congratulations go out to JR Richardson who was named the UPSA Conservationist of the Year at the last meeting at the William Anderson Sportsman Club.

The UPSA recently honored John Matonich, a former Natural Resource commissioner who served for two terms with the last term as the Chairman. He placed a lot of effort to see that the Upper Peninsula received as much attention as the rest of the State. He will be really missed by the Upper Peninsula Sportsmen's Alliance and the citizens of the Upper Peninsula. We thank you, John!

The award was presented today at a quarterly UPSA meeting at the William Anderson Sportsman's Club in Hermansville in Menominee County.

Ettenhofer, who serves as treasurer of U.P. Whitetails Inc., was given the award in "deep appreciation" for his vision, dedication, perseverance and guidance for wildlife, habitat enhancement and chronic wasting disease (CWD) education and prevention Alan Ettenhoferwork.

"Without your efforts, the Upper Peninsula would not be what it is today," the award plaque states.

Ettenhofer has amassed numerous accomplishments and has made significant contributions to a wide range of projects.

He helped form seven U.P. Whitetails organizations. He serves as chairman of UPSA CWD committee. He has been a leader in educating the public on CWD, including producing a radio public service announcement and testifying before the Wildlife Committee of the Michigan House of Representatives on the problem of potential importation of CWD-infected, improperly processed, deer to Michigan.

Ettenhofer has been a leader in securing grant funding to enhance white-tailed deer habitat in the Upper Peninsula. Among these projects, habitat was improved along the Whitefish River and in the Arnold area of Marquette County. Tree planting efforts have also been undertaken via the Forestland Group and Marquette and Delta counties conservation districts. Grant money has also helped fund deer trapping and tagging work.

"Al is a tremendous and tireless worker for conservation and wildlife in the Upper Peninsula," said Tony Denboski, UPSA president. "He is a fantastic choice for our first-ever 'Outstanding Conservationist' award."

The "Outstanding Conservationist" award will be presented annually.

The Upper Peninsula Sportsmen's Alliance was formed in 1982 to unite sportsmen's groups in the region for a common cause. Today, the group is composed of 57 clubs and businesses, representing 49,000 members.

The alliance's mission is to be the voice of U.P. sportsmen and outdoors users to promote, foster and advance the outdoor recreation experience, encouraging conservation of natural resources and the environment to perpetuate the direction of management and use, for the benefit of future generations by educating UPSA's members, youth and the general public.

The organization cooperates, when appropriate, with local, state and federal resource management agencies, encourages communication with the DNR on policy issues and respects the rights of landowners.

The UPSA quarterly meeting was held on April 22, 2017 at the United Sportsman Club. Guests included:

Would like to see more attendance at these meetings, we only meet on a quarterly basis.

UPSA is moving forward in making recommendations to the Department of Natural Resources on the subject of Game Species Management on state owned land that has been purchased with game funds. We strongly believe that game purchased land should be used to enhance wildlife and game species. We need to amend the Forest Management Plan to include management, Aspen rotation, and permanent protective lands. Well known game biologists that we have conferred with agree with the suggestions that UPSA is making. Updates on this subject will be printed.

The Upper Peninsula Sportsmen's Alliance held its quarterly meeting in Escanaba on the 11th of October. Tony Demboski, president, announced to the membership that UPSA has entered into a partnership with the Michigan Department of Natural Resources to develop and recommend policy in the management of state properties in the Upper Peninsula that have been purchased with game funds. UPSA believes that properties purchased with game funds should be managed for game species. UPSA is forming a committee of members with years of experience in Forestry and Wildlife so that each property can be evaluated and recommendations can be made.

Our rights to hunt, fish and trap are under attack like never before in Michigan. The Washington based Humane Society of the United States, the largest anti-hunting organization in the country has set its sights on Michigan with not one, but two ballot initiative referendums seeking to repeal pro-hunting legislation.

One thing that can defeat the anti-hunters is a concerned effort by Michigan's 1.2 million anglers and 775,000 hunters and trappers is to get the word out to Michigan's non-hunting and non-fishing populace about why wildlife management by a popularity contest is dangerous for conservation and wildlife.

This fight is about more than wolves. This goes to the core of how we manage wildlife in Michigan, the North American Model of Conservation, and our rights to hunt, fish and trap. If Michigan's hunters, anglers and trappers get active and engaged, we can show we are a sleeping giant and win. If we stay on the sidelines and say "its not my fight" then we don't deserve the rights that we will all lose. It is up to us.

Here are some of the things we can do:

The Upper Peninsula Sportsmen's Alliance was started in 1982 for the purpose of uniting sportsmen's groups for a common cause. Today the mission of UPSA is:

To be the voice of the U.P. sportsman and outdoor users to promote, foster and advance outdoor recreational experiences and encourage conservation of the natural resources and the environment to perpetuate the direction of management and use for the benefit of future generations by education of it's members, the youth and the general public. The organization shall endeavor to cooperate, when appropriate, with the local, state and federal resource management agencies and shall encourage communication with the Michigan Dept. of Natural Resources and Environment on policy and management issues and shall respect landowner rights".